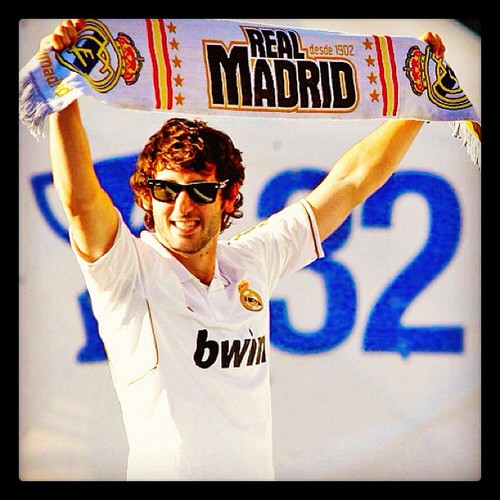 It’s been a few days since I found out that Esteban Granero, aka Pirata, was leaving Real Madrid to join Queens Park Rangers (QPR). Ngl, it still kind of hurts. Not as much as it did the first day though. The day before I found out he was leaving, I saw a QPR jersey, when I was on my way to class. I found it strange because after all, who watches QPR, let alone wears their jersey? At least in LA, I didn’t think anyone knew them. Later on, I realized that must have been a sign.

I didn’t find out about his transfer right away though. My phone had been off for aboout a week and I don’t have my laptop. In order to go on twitter, I had to go to the East LA library. Before going on twitter, I checked my email. That’s how I found out that Real Madrid had won the Super Copa against Barcelona the day before. I was so happy! Sure it was a meaningless trophy, but they beat Barcelona!!! lol So I went on twitter and I saw a tweet that said, oh Arbeloa’s tweet made me very sad. I was curious, so I went over to the twitter king’s profile to see his tweet. When I saw what it said i was like no way!!! I searched on twitter and sure enough, Granero to QPR was official.

I’m not the kind of person to show my emotions…like ever…unless I’m happy lol And i absolutely NEVER cry for anything else death of a very close family member. Well, there are 3 occasions where i have cried for football reasons. 1. When Mexico beat the US 4-2 in the 2011 Gold Cup final, I wasn’t sad though, just angry and frustrated. 2. When Bayern Munich beat Real Madrid in the penalty shootout of the Champions League semifinal and 3. when I found out Pirata was leaving Real Madrid.

Don’t get me wrong. I love that he will get way more playing time in QPR, but I will still miss seeing him in Madrid. Not only was he a great player, I loved his Madridismo.  I wish him good luck and hope he shows everyone why so many of us love him, not only as a player, but as a person.