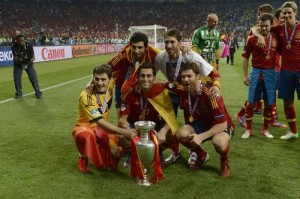 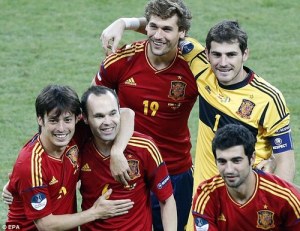 I know the Euro 2012 final was 3 weeks ago, so why am I writing this now? idk, I meant to write his right after Spain won, but….I kind of procrastinated a little lol. Well, I guess I can write about it now. At least I;m writing about it in the same month 🙂 First of all, I was beyond happy for Spain, I love 80% of the team, like 15% of them, and the other 5%? well, the other 5% are Barcelona players =P lol I actually like Iniesta though.

Although I had been rooting for Spain from the beginning, judging by the qualifiers, I really did think it would be Germany and Netherlands at the final. Despite this, I picked a Spain-France final. I was very shocked (but happy) that Netherlands didn’t even make it out of their group. I thought Germany would win the group (which they did) and Netherlands would be second. I’m happy it was Portugal who made it out of the group though. They have some players I like Cristiano Ronaldo, Miguel Veloso, Fabio Coentrao, and even Pepe (only cause he’s a Real Madrid player lol).

I was also surprised to see Russia lose in the group stage. I had picked them to win their group. Main reason I wanted them to go to the next round? Andrei Arshavin. I like him, he’s a good player, even if he is an Arsenal player =P I was disappointed that Sweden lost in the group stage. Esp cause Zlatan is one of my favorite players, even if he did leave Milan for PSG =( He did help Sweden beat France though, which I hated cause that meant Spain and France would meet in the QFs instead of the final. Can’t be too mad though, he scored a great goal.

I knew Spain would make it to the final, so that wasn’t too surprising. I was a little surprised to see Ital there, esp since they had to play Germany in the SF, I knew they’d be able to beat England, despite the fact that majority of the English players and media were all, Italy is going to be easy to beat -.- So glad Italy proved them wrong. It started off as a good final, unfortunate for Italy, that they lost a player due to injury and had to play 30 mins or so, a player down. Spain was incredible though. Idk which goal was my favorite- David Silva’s, Juan Mata’s or Fernando Torres’. Imo, they were all pretty great.

It was great to see Spain win, not only cause I like them, but I love what comes after a win. That’s right, their celebrations. Which means we get to see their airplane videos/pics, bus videos/pics etc. We also get to see them dancing, singing,  drunk Xabi, and much more. That day, and the few days after, I went on tumblr and twitter and saved so many pictures and videos of them haha it was a great day 🙂

First Target haul in months! Most of this was stuff for Selena including some cute plates and cups, toys for her baby, a book, and some kinetic sand. (I think that's what it is)
Here's the food we got 😋
Fun Day at Taste of Universal yesterday at Universal Studios 😊
Big end of the month grocery haul from Ralph's (first two pictures) and very small grocery haul from Sprouts (third picture) this should last me 2-3 weeks, it was about $156 or so, I had $25 worth of digital coupons lol
Grocery haul from Sprouts. Got a bunch of things to drink and a few things from bakery and other depts.
Grocery Outlet grocery haul. This was all about $78. According to the receipt, I saved about $109 by shopping there. Tried to buy mostly healthy foods, though I did get a couple snacks