I don’t know why it has taken me so long to post this trip recap. This trip took place almost three months ago!!! Oh well, better late than never!

February 23-26 2018
I have travelled to a few different places throughout the United States- Portland, Oregon, Washington DC, Las Vegas, to name a few. However, I usually travel with other people, either my travelling partner Giovanna, my sister Destiny, or my family. I had never travelled anywhere alone. That is, until February. That’s right, I went on my first solo trip at 27 years old.

I first travelled to Orlando, Florida last year in March 2017 for WrestleMania. I was there for almost a week and went with my travelling partner, Giovanna. This time I went to Orlando for four days and I went for the Disney Princess Weekend. I was there for about five days and had sucha blast!

I have to admit that the thought of it freaked me out so much!!! In fact, there were a few times that I even considered cancelling my trip rather than going alone. But after thinking about all the cons and pros of travelling alone, looking online, and speaking to someone who has gone on many solo trips, I decided to go for it. After all, what was the harm in travelling solo at least once?

Airplane Ride/Airport
Just getting to the airport was a mission! I walked to the bus stop from my house. Then I took the Metro Gold line to the Union Station, from there I got on a shuttle to LAX. I barely made it to the plane on time. I got to LAX ten mins before the gates closed. Lucky for me, there was no line for security checkpoint. As soon as they checked me and my things, I ran all the way to my gate. I got there four minutes before they closed my gates. I have never been that close. I am normally at the airport at least an hour before my flight is scheduled to leave, sometimes even two hours. I was so scared that I would miss my plane.

I got to Orlando airport around 430am/5am on Friday. I stayed there until about 830am/9am. I just listened to my ipod and used my tablet. I also ate chick fil a for breakfast. I think I even fell asleep for a while. I finally decided I had been there long enough and went to the expo to pick up what I needed for the two races.

Expo
The expo to pick up the bibs and shirts was huge. In fact, they had three different locations to pick everything up. The first building is where you pick up your bib. Then you have to go to another building for your shirt. In the second building, they also had non Disney vendors. I bought some running stickers and energy gels. Then I went to the last building to pick up some pins I had preoredered and in this building they had Disney vendors. I wanted to buy everything! They had such a huge selection of things, including cute leggings, pins, cute shirts, anything Disney Princess thing you can think of! It was way more than I had planned to spend. Since the lines were really long, I decided not to get anything after all.

Hotel
After the expo, I decided to go to my hotel to check in. The hotel I stayed at was in Kissimmee, Florida about 15 minutes away from Disney World. Unfortunately, it wasn’t ready when I got there. The people at the hotel told me I could go to the pool for a while, so I went in for an hour. It was really hot outside and the pool felt really good. I went to see if it was ready and they still needed more time to finish cleaning. So I decided to walk to Target, which was about 1.5 miles away, and window shop. Went to eat lunch at Burger King and then I walked back to the hotel, which was finally ready.

I spent three nights there. For the price I paid, I was expecting a small room. I was shocked when I walked into my hotel room. It was much larger than I expected. The first thing I saw when I walked in was the kitchen. It had a full size kitchen with a fridge, microwave, stove, dishes and utensils, and a sink. Next up was a dining room for four, the first bathroom, and even a living room with two small couches and a television. As if that wasn’t enough, there was a bedroom for me with a television, another bathroom, and get this, a Jacuzzi in my room!

It was awesome staying in this room, but I admit that I did get a bit scared at night, to the point where I slept with all the lights on and the door locked. The first and second nights I only slept about 3/4 hours each. The final night I slept maybe 5/6 hours, which still wasn’t enough.

Saturday morning I ran my 10k race. I did pretty well. I didn’t really go anywhere once I got back to my hotel because I didn’t want to be too tired for my half marathon and because I was a bit scared to go out by myself.

Sunday morning I was at the race by 330am! I went early to take pictures in the morning. After the race, I took some pictures with some of the Disney Princesses. Instead of going to the hotel, I decided to go to Downtown Disney. I knew if I went to the hotel, I would fall asleep and not want to leave the room for the rest of the day. I changed out of my race clothes and wore my three medals around.

Disney Springs/Downtown Disney
I went there last year. We went on the last day, so I didn’t have much money to spend. This time I was able to visit Hard Rock Café and got myself a mac and cheese burger. Kind of on the pricey side, but so worth it! I also got a creme brulee from one of the bakeries and a strawberry frozen margarita. I basically spent my whole time at Disney Springs eating lol One of my favorite things to eat was the poutine. 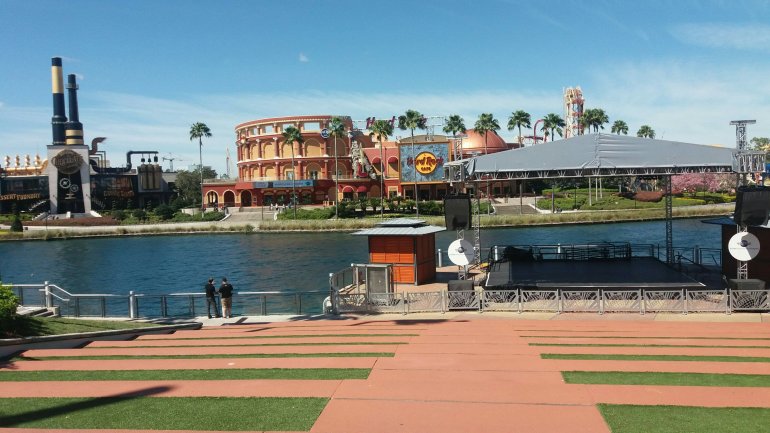 On Monday, my last day in Orlando, I decided to visit Universal City Walk after checking out. One of my favorite things about going to Universal City Walk last year was going to the Chocolate Emporium and getting a red velvet milkshake, which had a giant red velvet cupcake on top! So I couldn’t wait to go back. I also went to Fat Tuesday and got myself a blue raspberry icee. I went to the movies and watched Fifty Shades Freed. After my day trip at City Walk, I headed over to the airport to go back home.

Trip Back Home
After the scare I had getting to LAX really late, I made sure to get to MCO at least 2 hours early. I am so glad I did, because the security checkpoint line was huge! I had a stop in Colorado. Right when we got off the plane, we could feel the freezing cold air! I guess we were close to the mountains. I was only there for an hour and then I was back on the plane to LA. I got to LAX around midnight, I was exhausted when I got home.

Travelling solo was a lot more fun than I ever imagined! I would definitely recommend that everyone travels solo at least once in their lifetime. Yes, it can be scary, especially for someone like me who is an introvert and very shy.

My only complaint about travelling is having to use Uber or Lyft all the time. It can get pretty expesnive, especilly when going to Disney World or Downtown Orlando. I would rather use the public transportation or rent a car.

My next solo vacation will be a weekend trip to San Francisco during the summer. It will be another racecation, I will be running the San Francisco Half Marathon!